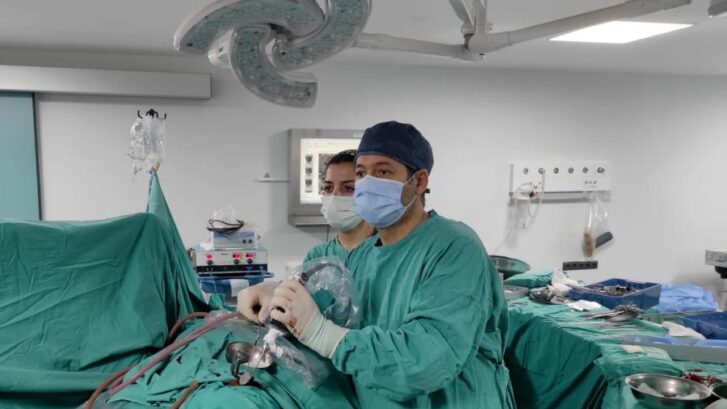 A 60-year-old male patient named Daff Tidiani applied to KTU Farabi Hospital from Mali, a West African country, with complaints of blurred vision and headache. It was learned that the patient had previously undergone nasal pituitary gland surgery in a clinic in Tunisia. The patient stated that he applied to KTU Farabi Hospital Brain and Nerve Surgery Clinic because of the complaint of blurred vision despite the surgery he had done. In the neurological and eye examinations performed in the clinic, the patient had visual loss and a recurrent mass (macroadenoma) pressing on the optic nerves was detected in the pituitary MRI (Emar). After the patient was hospitalized and the necessary examinations were made, he was taken into surgery. Surgery it was made by the team consisting of; Prof. Dr. Erhan ARSLAN from the Department of Neurosurgery. and Prof. Dr. Osman BAHADIR from the Department of Otorhinolaryngology. In the surgery, the tumor in the pituitary gland was successfully removed under the microscope by entering through the nose (endoscopic endonasal transsphenoidal approach). The patient, whose vision problems improved after surgery, was discharged with full recovery.

Prof. Dr. Erhan ARSLAN gave the following information about this disease and surgery:

Pituitary adenomas are mostly benign tumors and arise from the pituitary gland located in the sella turcica at the base of the skull. The pituitary gland is a 1 cm-sized organ located alone behind the eyes and responsible for hormone production. The pituitary gland is a central and vital organ that ensures the secretion of many hormones in our body and the water balance of the body. The clinical manifestations of pituitary adenomas basically vary depending on the pituitary cell from which they originate, whether they produce hormones or not, and the size of the tumor they reach. Accordingly, adenomas  smaller than 1 cm in diameter are called microadenomas; Adenomas larger than 1 cm are called macroadenomas. In pituitary gland surgeries, the most important structure to be considered while removing the tumor (macroadenoma) is the Internal Carotid arteries. Injury to the Internal Carotid arteries, known as the carotid artery from the neck, can have serious consequences, including paralysis and death.