When 65-year-old Mahmoud Burhan, who had an intraoral wound that started six months ago and did not heal, spread to his lips and prevented him from eating and swallowing, the patient presented to the ENT clinic of KTU Farabi Hospital. Dr. Benko Gubanoğlu: it was determined that the mass was malignant and had spread to the lymph nodes in the neck, and surgery was planned for the patient.The patient was evaluated by an anesthesiologist prof. Dr. Bahanur Cicic was transferred to the operating room, Binku Gubanoğlu performed as an assistant in the ENT clinic. And her team had an operation to remove all the diseased tissues and clean the lymph nodes in the neck. And in the same surgical session, Dr. Mehmet Oralulu, Professor of Plastic and Reconstructive Surgery Clinic, cosmetically correcting the shape of his mouth and lip. The patient recovered in a short time and is ready to eat and be discharged from the hospital
And in the evaluation of Dr. Bingu Chopanoğlu to Operation, “Head and neck cancers make up a large proportion of all body cancers. Bingu Chubanoglu went on to talk about the disease as follows: Head and neck cancers make up 9% of all body cancers. When we say head and neck cancers, cancers of the lips, tongue of the mouth and the palate. The inner cheek and the nose and throat area fall into this group as well.
Oral cavity cancers are the second most common head and neck cancer.
The oral cavity, which includes areas such as the lips, tongue, top of the mouth, hard palate, and buccal mucosa, is a more dangerous area compared to other head and neck cancers due to the course of the cancer.
The most important point in treating these patients is to determine the appropriate treatment for the stage of the disease and to find the most appropriate approach for the patient with careful team work during treatment planning.
Our Al-Farabi Hospital makes the final decision on the treatment that will be offered to patients through the councils, which is one of the requirements of a university hospital. Each patient is evaluated by our expert trainers.
The Oncology Board, which met with the participation of the trainers of oncology, pathology, radiology and radiation oncology, made a decision on the method of treatment for this patient.
“An otolaryngologist should be consulted in the case of non-healing wounds in the mouth” We would like to mention that; In non-healing wounds in the mouth, an otolaryngologist should be consulted and a biopsy should be taken if necessary. If caught at an early stage, disease-free survival is up to 80% when appropriate treatments are performed in these cancers. What we want to say about this patient is: “The surgical treatment has been completed in the most appropriate manner. The patient is interviewed in detail for the next treatment steps. The rest of the treatment will continue. With high morale and motivation.”
Mahmoud Burhan, who reached the exit stage and regained his health, said, “I didn’t care much before, but after the wound reached my lips, my weight began to seriously decrease, especially after May. I would like to thank all the staff who have taken care of me since today. in which I applied to Al-Farabi Hospital I would also like to thank the doctors, Dr.Bengu Chupan, who took part in the operation with Ms. Jiren and showed a close interest in my treatment process at the service. I am fine now and fortunately I am starting to eat too”

Selami HAŞİMOĞLU and Hamza KÖSE, the contracted medical tourism company managers of KTÜ Farabi Hospital, who organized the meeting, said, “We encountered a patient interest that far exceeded our expectations. This shows that KTU Farabi Hospital has a very high trust and brand value in the Caucasus and Central Asia. We are planning to hold similar meetings, where we bring our patients together with our KTU Farabi Hospital doctors more often in other cities in the Caucasus and Central Asia in the coming period.”

Chief Physician Prof. Dr. Celal TEKİNBAŞ said, “With the encouragement and intense support of our Rectorate, our plans to establish close contact with the Black Sea Region, Caucasus, Central Asia, Middle East and Africa regions in the field of Medical tourism are being spread day by day through the Medical tourism companies that KTU Farabi Hospital has contracted with. In the future, the activities of KTU Farabi Hospital in other geographies will also become more visible.” 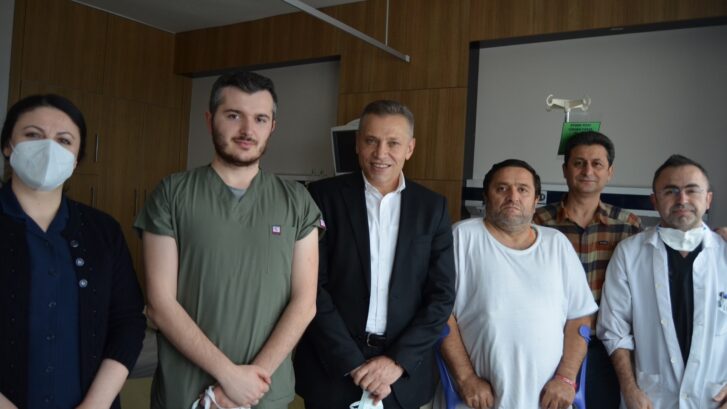 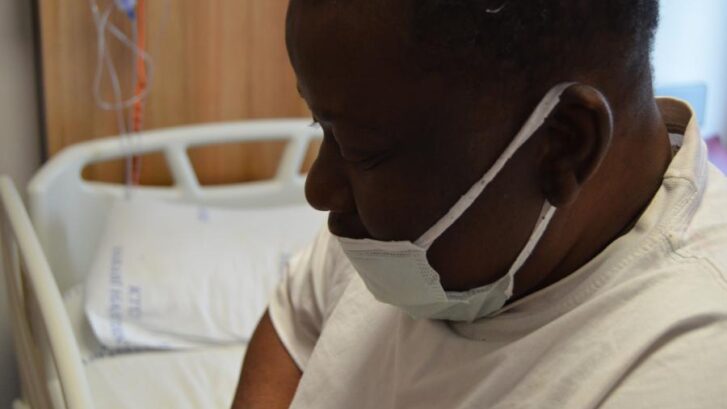 A 52-year-old male patient named Fousseini DIAKITE was admitted to KTU Farabi Hospital from Mali, a West African country, with complaints of inability to walk and severe pain in the left leg. The patient stated that many traditional methods had been tried in his country before, but his complaints were getting worse and the scars seen in the lumbar region during his examination belonged to previous injections he had had.

When the magnetic resonance imaging of the patient for spinal cord diseases was evaluated, there were observed egenerative severe stenosis in the cervical spinal canal and infection involving the spine and intervertebral joints, which were thought to have occurred due to injections in the lumbar region,.

Patient was taken into neck and lumbar spine operations simultaneously by Prof. Dr. Ertuğrul ÇAKIR and his team, in Brain and Nerve Surgery Clinic,. After the operation, it was observed that the pain in the left leg of the patient decreased and he was able to walk without support in the early period. Antibiotherapy was started for the infection in the lumbar spine. Although the patient’s infection is under control, his treatment is still ongoing.

“When our patient applied to our clinic, he had severe pain and I learned that he could not walk for 1 year. I examined the old-style MR (EMAR) films in their file, but there was no explanatory image. I suggested medicated MRI (EMAR) of the spinal cord, as I thought it would explain the current clinic. When the patient came with the results of the examination, I saw that there were severe stenosis at different levels due to degeneration in the cervical spinal canal, and that there were signs in favor of the infection between the lumbar spine, which I thought was caused by the scar in the lumbar region that I had noticed before. Since these two diseases require surgery, my team and I performed decompression and posterior instrumentation surgeries on the neck and waist regions of the patient.”

Prof. Dr. Ertuğrul ÇAKIR said the following about the operation and diseases:

“There are three main reasons for the narrowing of the cervical spinal canal. These can be listed as structural stenosis, stenosis due to aging and wear in the disc, and stenosis due to aging and wear in the spine joints. In general, it is seen as cervical myelopathy findings (limb dysfunction in arms and legs, gait disturbances, bladder and bowel dysfunction, etc.) and cervical radiculopathy (pain, numbness, loss of function in arms and legs, etc.). Although partial benefit can be obtained with drug treatment, surgery has an important place in advanced and severe cases.’’

“Lumbar spondylodiscitis and spine infections generally present with severe pain and loss of limb function, and surgery is performed when drug therapy alone is not sufficient. Although satisfactory results are not always obtained after the surgery, depending on the severity of the spinal cord and nerve damage, we are very happy that many of our patients benefited from the surgery and started walking again, as in this patient example.’’